Jeffe Kennedy is an award-winning author whose works include novels, non-fiction, poetry, and short fiction. She has won the prestigious RITA® Award from Romance Writers of America (RWA), has been a finalist twice, been a Ucross Foundation Fellow, received the Wyoming Arts Council Fellowship for Poetry, and was awarded a Frank Nelson Doubleday Memorial Award. She is the current President of the Science Fiction and Fantasy Writers of America (SFWA).

Her award-winning fantasy romance trilogy The Twelve Kingdoms hit the shelves starting in May 2014. Book 1, The Mark of the Tala, received a starred Library Journal review and was nominated for the RT Book of the Year while the sequel, The Tears of the Rose received a Top Pick Gold and was nominated for the RT Reviewers’ Choice Best Fantasy Romance of 2014. The third book, The Talon of the Hawk, won the RT Reviewers’ Choice Best Fantasy Romance of 2015. Two more books followed in this world, beginning the spin-off series The Uncharted Realms. Book one in that series, The Pages of the Mind, was nominated for the RT Reviewer’s Choice Best Fantasy Romance of 2016 and won RWA’s 2017 RITA Award. The second book, The Edge of the Blade, released December 27, 2016, and was a PRISM finalist, along with The Pages of the Mind. The final novel in the series, The Fate of the Tala, released in February 2020, along with a short novel epilogue, The Lost Princess Returns. A high fantasy trilogy, The Chronicles of Dasnaria, taking place in The Twelve Kingdoms world began releasing from Rebel Base books in 2018. The novella, The Dragons of Summer, first appearing in the Seasons of Sorcery anthology, finaled for the 2019 RITA Award.

In September 2019, St. Martins Press released The Orchid Throne, the first book in a new romantic fantasy series, The Forgotten Empires. The sequel, The Fiery Crown, followed in May 2020, and culminated in The Promised Queen in May 2021.

Most recently, Kennedy has released two new series. The epic fantasy romances in the Heirs of Magic series include The Long Night of the Crystalline Moon, The Golden Gryphon and the Bear Prince, The Sorceress Queen and the Pirate Rogue, and the upcoming The Dragon’s Daughter and the Winter Mage (September 2021), and The Storm Princess and the Raven King (February 2022). The Bonds of Magic series are dark fantasy romances and include, so far, Dark Wizard, Bright Familiar, and Grey Magic (December 2021)

Jeffe can be found online at her website: JeffeKennedy.com, every Sunday at the popular SFF Seven blog, on Facebook, on Goodreads and pretty much constantly on Twitter @jeffekennedy. She is represented by Sarah Younger of Nancy Yost Literary Agency. 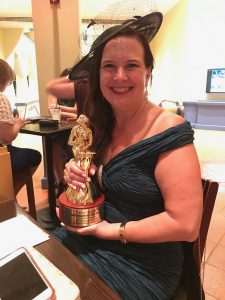